God, if I only had these photos back when I played with the Couch Slugs in Athens, Ohio. 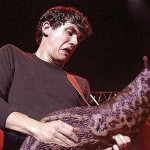 posted on August 14, 2014 in Uncategorized with 0 comments

During Mardi Gras season I was all warmed up.  Wasted Potential Brass Band had four gigs in a row and the previous Christmas season we stayed busy and the band was well oiled. Anyway, as a lark I got together with Ferguson for a jam at my house.  I wanted him to play my new guitar.  That night is encapsulated in the video below. We had fun and though I’d never heard the songs before that moment, I seemed to fall right in.

The lyrics and rhythms are pure Posse material.  Good enough to commit to record. So, three months later we’re practicing to record some of these tunes.  We’ll see what happens (rarely will it be what we expected).

Elliott Street is in the shadow of the (soon to be no more) Georgia Dome and downtown Atlanta.  Last time we played out on the street and enjoyed a good response.  Wasted Potential plays second-line and NOLA style brass band music in Atlanta. This time we were ready but lost our singer to his family spring break.  Not defeated, we decided to forge ahead and began rehearsals with the smaller group… when we lost our lead trumpet player to a gig in Augusta, at The Masters.

What now?  At that point, we consider to canceling the gig.  Jamie, our trombone player, called the pub owner to explain and was advised that the pub owner had spent considerable resources promoting that night.  Elliott Street is in the resurgent neighborhood of Castelberry Hill.  Lots of arts and artists, a fair amount of history (cool old buildings, a rare thing in the ATL).  So that night the neighborhood had an Art Walk.  Elliott Street was off the path but within earshot, so the pub owner fully expected to see Art stragglers and neighborhood hipsters.

So we were stuck.  Jamie rallied us together to play the gig.  Jamie found a new guy to sit-in on tenor sax; he hadn’t played with us yet and with this band, it’s STEEP learning curve.  Also, were lucky enough to have a strong (but busy) alto-player.  So we had bodies but the core of the band (vocal/entertainer and trumpet) were missing.  As far as vocals went, we opted to play fewer traditional, melodic NOLA tunes in favor of second-line and hip-hop jump style.  We practiced with the smaller group and, to be honest, we were pretty nervous about carrying this gig while being short-handed.

It turned out great!  The place was jumping.  We had the best crowd I can remember.  Although Elliott Street Pub’s stage is in the basement we played out on the street between parked cars.  Once the people arrived and we began to play, the little bar emptied out and the street filled up.

Over time I’ve realized that constraints force creativity.  As a drummer, the fewer choices I have (drums, cymbals, sounds) sometimes the more I lock in and do great stuff.  Being backed into a corner can be a great motivator.

posted on April 14, 2013 in Uncategorized with 0 comments

Experimenting on a Sunday afternoon. Based on Hypnotic Brass Band tune.

posted on March 24, 2013 in Uncategorized with 0 comments

A long time coming, this website is going to serve as a warehouse for my projects (music, past and current), a Calendar to keep me organ-iz-ised, and a place for ponderings and experimental music.

I used to write letters back in the day.  Friends and family who read them encouraged me to write a book or at least compile the writings somewhere.  After college, I got work as a technical writer.  That led to some excitement initially, especially as the world of digital communication began to unfold (circa 1987).  I documented telephony and high-speed (T1) switching systems, networks, etc.  Heady days at first.  It also led to tedium.  Once I got a feel of things I wanted more, more to do and more creativity for the technical briefs, hardware and software manuals I had to produce.  So I got into multi-media development where technical words could be accompanied by pictures, motion, and eventually music.

Then came the world wide web.  I no longer had to react to another engineer’s design, I was able to design my own application or thing.  For most of the past 15 years, a significant part of my day job has circled around the web.  And so here I am.

I’m not as interested in the web as a medium, but love how much easier it is to compile all of my various media and share it.  I want a place for my stuff.  This will be it: couchslug.com.   It will be my music catalog, with sounds photos and movies, samples and maybe something I haven’t even pondered yet. I’ve got a lot of history to log but I think I’ll enjoy, given time.

To start, here’s an audio sample from a recording done over the summer.  This is Wasted Potential Brass Band recorded live but in the controlled environment of a studio in Avondale Estates…

posted on November 23, 2012 in Uncategorized with 0 comments