The foundation for WPBB, the Lucky Dogs was a happy accident started by Evan Frayer with Mico Bowles sitting-in.  It began as a pickup gig at Steinbeck’s in Decatur, GA.  Thursday nights when the weather was warm, Evan set up his little amp and mic. Mico came.  Then others followed.  I was one of the others. 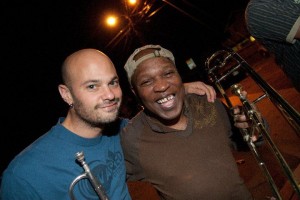 From the beginning, the Lucky Dogs was a pick-up gig. So the tunes had to be kinda simple, readily learnable, or blues form, or..eh,”yo you don’t know the changes, then just follow Evan.”  Evan would make gestures, hold up fingers too fast to see, and sometimes raise eye brows to signal a change.

All the while he’d heckle the audience and favorite curmudgeon bartender Jimmy.

The cast of characters included Evan, Mico, and sometimes Snave.  Jamie Hemphill horned his way in on bass guitar as he was learning the instrument.  Like old cheese, the Lucky Dogs were fertile ground for growth and if you came back after a few months or a year, it would look and sound different.

Bob Rice held the grooves nicely on drums.  Whether Bob could make it or not, Bongo Bill (McCollum) was a regular on percussion and could cover drums in a heartbeat.  Sometimes Mico would bring his students, one of them was Jesse.  Sometimes Evan would invite other horns like Lil Joe from Chicago.  Jeff Smith and sometimes Larry Smith on sax.  Various little floaters in the pool of pre-wasted potential Lucky Dogs.

Here are some videos from that era…

The Lucky Dogs didn’t actually have a name.  Lucky Dogs is the name of the hot dog street vendors in New Orleans. But generally, the band was known as Evan’s Band or, to me, the “open jam” Thursdays at Steinbeck’s. Still, the story really begins with Evan.

Evan Frayer is a carnival barker, singer, impersonator, comedian.  He plays a bunch of instruments. At 16 Evan went to a performing arts high school and worked the funway at King’s Island (Cincinnati).  His story is like Steve Martin’s (who worked at Disneyland) but with gray and more girth.  In the late 80s Evan played gypsy style on the sidewalks of Atlanta and New Orleans, accompanying Danny Dudek aka Atlanta blues apostle, Mudcat.

So anyway, back at Steinbeck’s on Thursday nights Evan’s antics were always entertaining.  The set, the songs were different every week, more or less.  To play with this band, one had to be alert and flexible.  Evan would charge straight into a song, call “audibles” on song forms, used big gestures to let you know (or not) that a change was coming. He could change the set or the tune on a dime: same tune, different key, never the same lyrics.  He’d pull in jokes and current events, rib the foot traffic walking through Oakhurst, egg on MARTA bus drivers and tirelessly rib Jimmy.

The band existed mostly during the summer months and always at Steinbecks.  Since the bar was in our neighborhood, it became the gathering spot whether we playing or meeting for beers.

once Evan couldn’t make it…